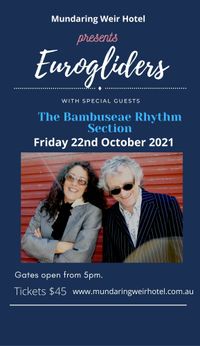 “Hometown heroes Eurogliders return to Perth for first time in 30 years”! The EUROGLIDERS story began in 1981, in Perth, Australia……the most isolated city in the world. Within a decade of forming, EUROGLIDERS had recorded four albums, enjoyed a multitude of chart topping singles and been awarded a swag of awards from around the globe, for both music and video. We look forward to welcoming them back to their home soil. they will be joined by special guests Bambuseae Rhythm Section